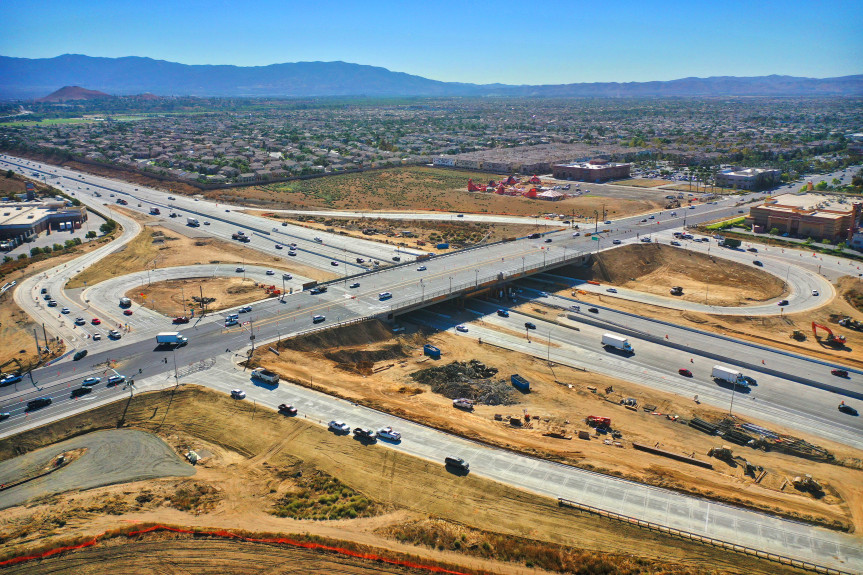 A $39 million project that aims to unclog a Riverside County bottleneck at Limonite Avenue and the 15 Freeway is almost done.

The project’s new eight-lane Limonite Avenue bridge over the 15 is finished. And construction workers expect to wrap up a sweeping network of new, wide interchange ramps early next month, said officials with Eastvale and Jurupa Valley, which are directing the project.

A ceremony to celebrate the project’s completion is set for Thursday, Nov. 14.

Cosmetic features such as landscape planting — “a lot of the jewelry, so to speak, of the interchange,” said Eastvale City Manager Bryan Jones, still must be added. For that reason, drivers will see workers at the site several more weeks.

Meanwhile, work will continue for many more months on the $472 million project that’s adding toll lanes on the 15 Freeway through the same area. That project is expected to be completed in late 2020.

But all the pieces of the Limonite interchange motorists drive on will be done shortly.

“It’s really nice that we’re coming to the finish line here,” Jones said. “It will be sweet when it’s complete.”

The project targeted a congested section of Limonite Avenue notorious for its mile or more of daily traffic jams, Berkson said. Cars have routinely stacked up to Hamner Avenue on the Eastvale side of the freeway and to Wineville Avenue on the Jurupa Valley side.